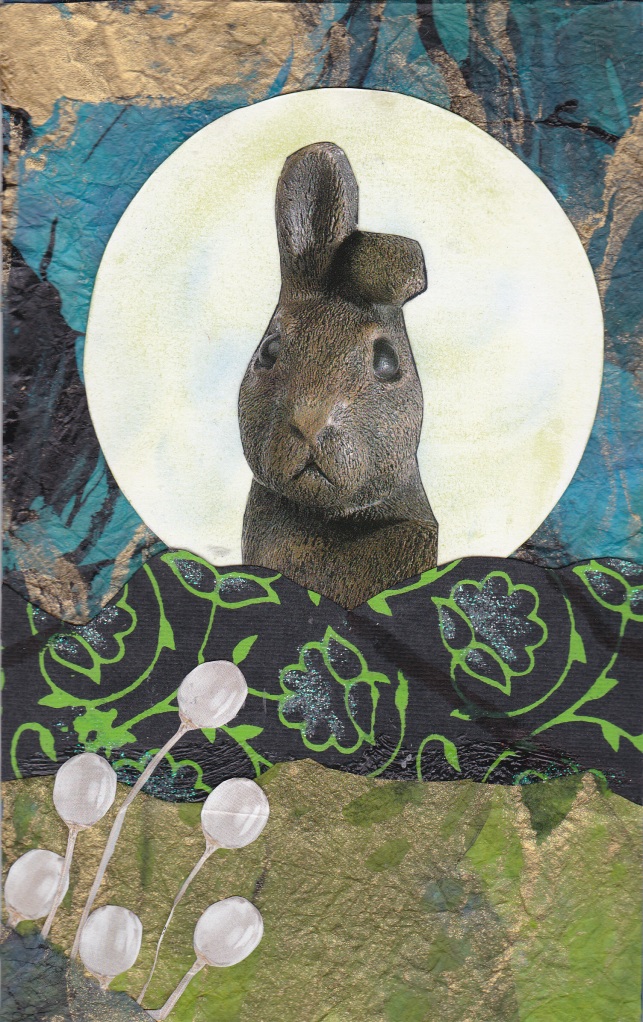 “Sometimes, when you’re deep in the countryside, you meet three girls, walking along the hill tracks in the dusk, spinning. They each have a spindle, and on to these they are spinning their wool, milk-white, like the moonlight. In fact, it is the moonlight, the moon itself, which is why they don’t carry a distaff. They’re not Fates, or anything terrible; they don’t affect the lives of men; all they have to do is to see that the world gets its hours of darkness, and they do this by spinning the moon down out of the sky. Night after night, you can see the moon getting less and less, the ball of light waning, while it grown on the spindles of the maidens. Then, at length, the moon is gone, and the world has darkness, and rest…..

…on the darkest night, the maidens take their spindles down to the sea, to wash their wool. And the wool slips from the spindles into the water, and unravels in long ripples of light from the shore to the horizon, and there is the moon again, rising above the sea….Only when all the wool is washed, and wound again into a white ball in the sky, can the moon-spinners start their work once more….”

Today, we introduce the Moon, as our symbol for the next few weeks. Though some ancient cultures saw the Sun as feminine and the Moon as masculine, in most minds Moon is equated with the feminine. Rightly so, for she governs conception, pregnancy and birth; sowing, sprouting and reaping – all things fecund begin with her blessing. It’s little wonder that in China, Korea, Japan people see a rabbit in the Moon, rather than a man or woman. The Cree nation also associates the rabbit and the moon as did the Aztecs. Of course some rabbits are white and they all like to come out at night, enhancing their association with the most magical, fascinating and unearthly object this world has ever known. Not that the sun doesn’t command respect and worship – it certainly does, but the elements of enchantment and numinosity are sometimes lost in its penetrating, consistent, brilliance. The Moon changes, wanes and waxes. Her gravitational power links us to her as the water that makes up 60% of our flesh moves to her rhythms, captive as the ocean tides. Whatever her phase, she never fails to stir the human imagination, even in her absence.

Rabbit happens to be my totem animal. She has many many attributes ranging from shameless trickster in her male guise to nourishing mother. Like the Moon, and all of us, Rabbit has a shadow side that complements her brighter aspects. For instance she is fearful and tends to freeze in the face of danger, her escape is swift and erratic and sometimes much too quickly triggered. She has always had much to teach me.

Rabbit also links us to the number three forming a bridge from our study of the last few weeks to this new, not so unrelated topic. Below you see some examples of the three rabbit or three hare motif. The first known representation of this symbol comes from some Chinese Buddhist temples along the Silk Road dating from about 600 B.C.E (obviously, it was already a commonly recognized image or it wouldn’t have been used as a temple decoration). Three rabbits form a lunar circle to share three ears, though each appears to have two. This optical illusion is created by arranging the three ears in a triangle, allowing each pair of adjacent hares to share an ear. In some ways it thus becomes a visual koan. 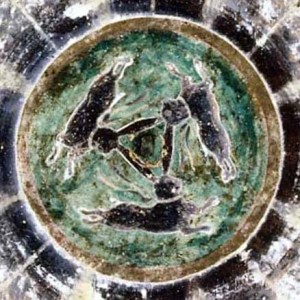 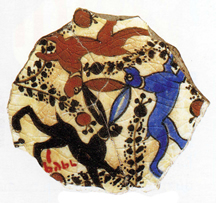 The design must have struck some deep chord in people because it spread through China, and the Middle East and then across Europe, making the transition into Islam and Christianity without losing an iota of its original pattern.

Whichever of Rabbit’s facets we focus on, her long ears and soft fur speak to humans on some deep primal level – that same deep pool of unknowing through which the Moon moves, trailing our psyches behind her. 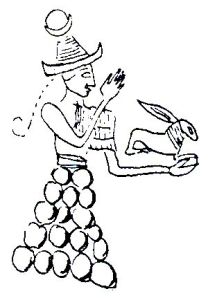 Decorating an evergreen, usually fir, spruce, or pine is part of the celebration of Christmas and the Winter Solstice rites. The evergreen tree and its branches are often made into a wreath,  swag or garland  and  used to decorate the house, hall, store, barn  or building.  It is also placed in the town square. This month we will work with the evergreen tree and make up our own stories to accompany our collages. You might use the prompt, evergreen tree or Christmas Tree  and see what stories come up for you.

Here is a little history of the Christmas tree. Cutting down an evergreen tree and bringing it into the house is both a secular and a religious symbol of Winter and Christmas.

According to the Encyclopædia Britannica, “The use of evergreen trees, wreaths, and garlands to symbolize eternal life was a custom of the ancient Egyptians, Chinese, and Hebrews. Tree worship was common among the pagan Europeans and survived their conversion to Christianity. It is a Scandinavian custom to decorate the house and barn with evergreens at the New Year to scare away the devil. They also set up a tree for the birds during Christmastime.

Alternatively, it is identified with the “tree of paradise” of medieval mystery plays that were given on 24 December, the commemoration and name day of Adam and Eve in various countries. In such plays, a tree decorated with apples (to represent the forbidden fruit) and wafers (to represent the Eucharist and redemption) was used as a setting for the play. Like the Christmas Nativity crib, the Paradise tree was later placed in homes. The apples were replaced by round objects such as shiny red balls.  The entire tree didn’t come into the house until the 19th Century. However; it was common for an evergreen branch to be brought in, hung from the ceiling and decorated with edibles, like apples, nuts, cookies, colored paper, stars made of straw, ribbons, and wafers.  People believed in the tree‘s magical powers linked with harvesting and success in the New Year.

In the 1800 when George 111 married Charlotte, a German-born queen, the Christmas tree was introduced to the children. The tree became associated with children and gift giving. The custom of decorating trees in winter time can be traced to Christmas celebrations in Renaissance era guilds in northern Germany and Livonia, (present day Latvia and Estonia). The Guild Halls had a decorated tree with dainties that the children would collect on Christmas day. After the Protestant Reformation, such Trees are seen in upper-class Protestant families as a counter part to the Catholic “Christmas Nativity Cribs.”

In 1584, the pastor and chronicler Balthasar Russow wrote of an established tradition of setting up a decorated spruce at the market square where the young men “went with a flock of maidens and women, first sang and danced there and then set the tree aflame”.

By 1870 putting up a Christmas tree had become common in America. Russia banned the Christmas tree after the Revolution. It was reinstated as a “New Year Spruce in 1935.  It became a secular icon decorated with airplanes, bicycles, space rockets and other toys.