Meet Kathryn Phillips who took up our invitation to visit the virtual studio and join the fun.  I hope you enjoy her work as much as we do and that you too will be inspired by one of the stories that inspire us.  Or send us a suggestion for a story and or your own work around it.  We’ll be happy to post it along with your comments.

Following pieces are by Kathryn Phillips.  The comments are hers. Have a question?  We’ll pass it along. 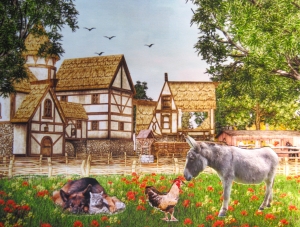 This first pair is about the Musicians of Bremerhaven. One shows the idyllic life our elderly “heroes” so justly deserved. 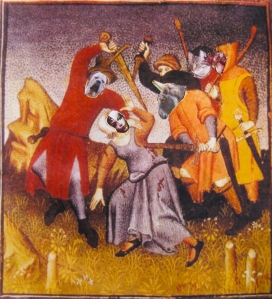 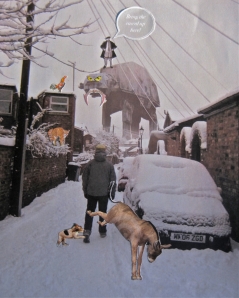 But wait, they had no more “right” to terrorize and then brutalize the lone robber than the robbers had to the same to  unfortunates who crossed their paths. The musicians INITIATED the the whole action and felt justified in doing so because they had been oppressed by other humans. A slippery slope indeed. This is why the musicians faces are superimposed upon the medieval bandits, and the woman being victimized also shows a two-sided character. One assumes she may be an innocent, but who knows what evil she may have committed?

In the final picture, I found the star wars monster already embedded in the snowy photo, but I added details to make it the monster the robber imagined… 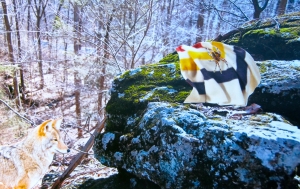 The first depicts the beauty that is the natural world, with coyote paying homage to Rock and Iktome acting as witness. 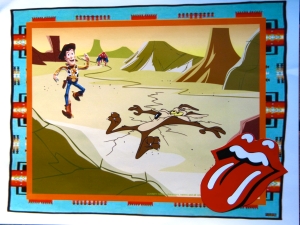 Coincidences based on archetypes or native American symbols co-opted by mainstream culture? Aside from sports team (Braves, Redskins, etc.), what other images do we de-mystify and devalue by making them into caricatures? What subtleties are lost when the inactive message is lost to passive massage (Marshall McLuhan) of prepackaged ideas?