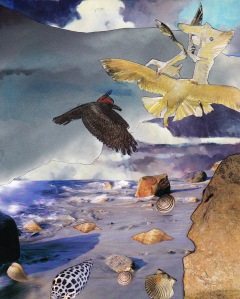 Raven Greets The Man Who Sits On The Tide

Unlike the primary gods who make something out of nothing and get the whole shebang rolling, Tricksters create from prima materia – the primary materials of this Earth.  In this role they are the first artists, fast change artists to be exact, for change is what they create.

This story from the Pacific Northwest is full of fog and the sea.  It tells the tale of how Raven created tides.   The surge and ebb of the sea usually occurs four times a day, though some places experience it only twice.  The Moon’s gravitational pull is the principal mover of tides, but the Sun, deep sea tides, the Coriolis effect and varying depths of water near the shore all contribute to different level s and frequencies.   Yet, even with today’s technology accurate tide depths are not easy to predict.   The sea remains a mysterious fascinating force and so does Raven.  His heavy wing beat and raucous cry never fail to send shivers of awe down my backbone, especially on a foggy beach just as the tide begins to turn.

Fog can be a symbol for doubt and confusion but it can also be a warning that some knowledge is best kept hidden.  It can provide a hiding place or refuge, but it can also facilitate loss or conceal lurking danger.  Fog muffles sound and plays tricks with direction and acoustics.  In films, fog is an ominous harbinger of change for the worse and sometimes symbolizes evil itself.   Fog and Trickster make a very good match.

Personally, I love fog.  I like moving in a magic bubble of air; outside of it, I see nothing, but inside all is revealed.  Fog changes the landscape, alters shapes makes every step a surprise as things emerge and disappear.  For me, fog makes magic almost tangible.  I always greet it with little leap of the heart, excitement and frisson of fear.  Now, anything can happen, “there might be giants.”

And in this story there are.  The Man Who Sits On The Tide is gigantic enough to stopper a hole in the seabed that allows the ocean to empty.  It seems like an important job.  Disturbing him could have grave consequences.  Yet raven attacks this giant with impunity.  He employs two natural resources, fog and pain.  Wielding them with wit and determination he trains the giant like one of Pavlov’s dogs.

This is Trickster at his finest, creating profound change for the benefit of all, including him.